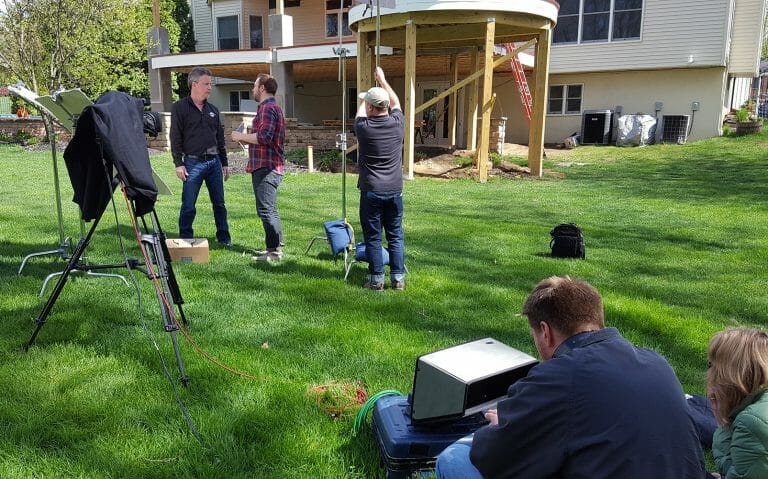 Sean McAleer the owner of DeckRemodelers.com, was sought out as an expert and appeared on “HouseSmarts” NBC TV’s nationally televised home improvement show. HouseSmarts brings the viewer, useful information to enhance their lifestyle through home improvement. DeckRemodelers was chosen for their exceptional work in outdoor designs brought to the homeowner through their carefully selected staff of designers, craftsman and specialists. Designing and building an outdoor living space also requires expert techniques and a vast awareness of materials all part of what they bring to the homeowner. DeckRemodelers has become a trusted name for discerning homeowners. This upright standing was earned by taking the time to listen to individual dreams and desires then bringing them from concept to completion.

HouseSmarts host Teagan Wright interviewed Sean on location in Mendham, NJ. There he presented all of the specifics of this project, still under construction. Starting with an interactive 3-D plan, DeckRemodelers allows the homeowner to better envision their future outdoor living area. They can see a rendering of their home, as it will appear when complete and travel through the plan at eye level. The Mendham deck will feature a covered structure designed with curved beams to allow for a barrel style tiger wood ceiling topped with a metal roof. Also planned is an elevated circular lounge with porcelain tile inlay bordered in matching PVC. The deck will be supported in steel allowing for a fully functional lower area uninterrupted by columns. The homeowners will also enjoy a sauna secluded by a stone façade.

Staff Designer Stevie DiFrisco, then presented a completed DeckRemodelers project in Berkley Heights, NJ. Sean’s design here is well planned and considers flow as well as the projected multi level interaction of guests. Central to this design as the point of approach from the interior, is a covered area supported by stately columns alternating with powder coated aluminum rails. To the right of the covered area, is a fully functional outdoor kitchen embellished in stone and complete with a 42” grill, smoker and refrigerator. An Equinox motorized pergola protects the kitchen. The pergola offers the homeowner an evolution of outdoor living. Outdoor entertainment is no longer weather dependent but rain or shine at the touch of a button. This pergola when closed offers watertight protection.

Flower planters accent the steps from the kitchen area to the lower hardscape leading to the hot tub. Accessible up from the hot tub is an open-air dining space that returns in full circle to the covered area. The party here doesn’t end at nightfall but continues on thanks to the lighting design. A backdrop of light accents textural effects while safety and security are provided to direct ones path.

The episode originally aired on Saturday May 21st.